Your TV Wall mount might just be the most important part of your entertainment setup that you hope is never seen.

Holding onto your home’s support to ensure your TV stays stuck to the right height, your TV wall mount needs to be large enough to align with the brackets on the back of the television. It also needs to be sturdy enough to handle the weight of the television, and easily secured to your wall without posing the risk of ripping your drywall right out off of the supports.

What You Need in a TV Wall Mount

Before we get into the best TV wall mounts on our list, we should probably go over the differences between each one. Despite many holding the same shape and relative size, not all TV wall mounts are created equally. In fact, there are three distinct types of TV wall mounts you’ll need to be on the lookout for:

How We Chose Our Mounts

For our top ten list, we’ve chosen the Best TV wall mounts on the market based on a variety of criteria.

First and foremost, public perception is taken into account. Boisterous claims are common in marketing schemes and can make it difficult to tell what a TV mount can and cannot do. However, thousands of crowd-sourced strengths and weaknesses give a more rounded picture of what most people like and dislike about a product.

We’ve also chosen products based on their price point. With many things, you can expect to get what you pay for them, and we think that’s especially important to keep in mind with a TV wall mount. After all—why go cheap on a product that holds one of your most expensive items?

Our chosen TV wall mounts range in price to cover a wide swath of budgets and home setups.

We’ve also chosen the best-in-class wall mounts from all three of the mentioned TV wall mount types, so whether you’re in the market for a fixed mount, tilted mount, or articulated mount, there will be something in our list for you.

Looking for top-rated TV mounts? Check out our top picks.

This first, basic wall mount from Amazon comes with just enough strength and features to match the most amount of people.

The AmazonBasics brand from Amazon is one of those introductory generalist brands that tries to cater to as many people as possible for the price. With their tilting wall mount, you can expect no less.

This mount boasts a universal design and offers about 18 degrees of tilt. It’s important to note that 15 of these degrees is positive, in case you were hoping for a different angle. Other features include a low 1.8-inch profile, quick pull tabs, and a built-in leveler.

There’s nothing remarkable but simultaneously nothing to complain about with the AmazonBasics wall mount. If your television is just a bit bigger than everyone else’s, you may want to consider this Cheetah product for hard use.

The Cheetah APTMM2B Wall Mount is similarly built to that of AmazonBasics—accept for the weight limit. You can mount a television up to 165 lbs with the Cheetah mount, as well as get about 10 degrees of tilt. That level of tilt with such a high weight limit makes this quite a rare breed of TV mount.

An HDMI cable and a level are included with purchase to further sweeten the deal, and you can mount a television up to a whopping 80 inches using the Cheetah mount. Aside from a lack of articulation, we can’t think of a reason why you wouldn’t want this for larger televisions. 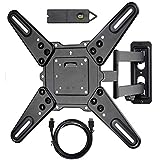 For mid-sized televisions that need lots of horizontal rotation, this articulating wall mount might be the perfect fit.

Otherwise, you can expect some sturdy build quality and a host of positive public perception with this VideoSecu product. While it may be a little more expensive, you can also purchase variations on this mount for up to 88-inch televisions, so if you need to watch television from the opposite room and need something that can move with you, this might be your best bet. 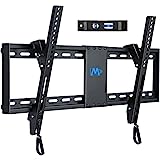 The Mounting Dream MD2268-LK wall mount is another high-capacity mount that can hold televisions up to 132 lbs. It is also surprisingly thin and can keep your television about 1.5 inches from the wall.

The biggest drawl of the Mounting Dream is the 10 degrees of downward tilt you can get. If an archway or some other design choice in your home requires a high-mounted television, this sleek and simply mount will ensure that your viewing position is always optimal. 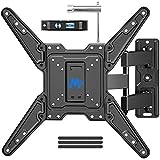 Another Mounting Dream product, this articulating wall mount acts much like the one from VideoSecu and proves to be another solid offering from the company.

The 60 lbs capacity is a little on the longer end, but with a massive 20 degrees of tilt, this is the most articulated mount on our list yet. Rounding out the features is about 1.5 feet of extendable length, 5 degrees of post-mount manipulation, and of course, a level. 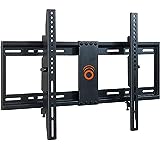 As another tiling wall mount, this Echogear product stands out from the crowd with 15 degrees of smooth tilt and a simpler installation.

Boasting that three easy steps are all it takes to mount a television, Echogear’s positive public perception and large 70-inch capacity mean that anyone with a mid to large television should be happy with this level of tilt.

We’re a big fan of the simple installation in particular, so if that’s your prerogative, we’d recommend stopping here.

Coming in with 18 inches of extension and installation on a single stud, this straight and to-the-point wall mount for small-to-mid-sized televisions has it all. You can tilt, swivel, maneuver, bend, and twist this mount into just about any position you can think of. 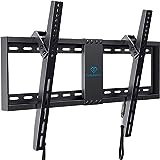 Coming with the usual 7 degrees of tilt with a bit of lateral motion, Perlesmith’s tilting wall mount sets itself apart with a tiny 1.2-inch profile, HDMI cable, and other goodies covered by the 5-year warranty.

More easily installation methods come with the Prelesmith than other products on our list, so even though the tilting is weak, we still think this is a fair choice for a TV wall mount.

Much like the tilting mount from Amazon, this articulating wall mount isn’t going to win any major awards. However, with a respectable 16.3 degrees of extension and 15 degrees of tilt, it’s a great choice for someone who wants to save money but go short on features. 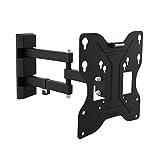 Finally, this tilting wall mount with an extension from QualGear comes in at nearly the bottom of the list on price, but not on the feature set.

You can mount a television up to 66 lbs on the QualGear mount without fear, and expect a full range of motion as well as a 15.5-inch extension. It’s not the highest regarding weight or overall quality, but at this price? It can’t be beaten by any other mount.

Like we mentioned before, the type of home you have determines your TV mount.

The first is the standard, fixed TV wall mount. This mount is perfect for homeowners that simply want their television at a certain height and little else. This “set and forget” quality makes these mounts on the more affordable side than some of their other counterparts.

However, a fixed TV wall mount works best when a couch is situated directly in front of the television, as is also at about the same height. If you have a large viewing radius or need to mount your television much higher than couch-level, you may want to consider one of the other two options.

The second type of TV wall mount is the tilting wall mount. This mount gives you one axis of rotation—in this case, vertical—to maneuver your television around. So, if you need your television to hang near the ceiling or otherwise be higher in the room, you can easily tilt the television downward and angle it into it’s best possible position.

While this axis of rotation offers more flexibility than the fixed TV mount, it’s still not perfect. For example, if you have a larger horizontal plane in which people will be seated, there’s no way to rotate a tiled TV on the X-axis and towards them.

Likewise, tilting TV mounts, much like fixed TV mounts, are designed to be set and then forgotten. If your viewing situation or perspective changes, there’s no easy way to change the tilt without brute strength or, occasionally, having to re-mount entirely.

Finally, there is the articulating TV mount, which is the most expensive and most customizable version available on the market today. Articulating TV mounts often move in all three axes of space, and can either tilt upward or downwards, left to right, and even come off of and back onto the wall on the z-axis.

This setup is popular in smaller spaces or in homes where the viewing perspective of the audience changes constantly. They are also much easier to maneuver, so changing the TV’s orientation or angle is often as simple as heading to the TV and giving it a bit of a push.

An articulating TV mount can be set and forgotten, but is more for people that need to keep things fresh or unique with their television perspective needs. Choosing the best TV wall mount for you will mean leveraging your needs with the strengths, weaknesses, and price points of these three major TV mount types.

​As you can tell, there’s a lot that can go into your television mount. Be sure to know the weight, size, and any hardware you might need to mount your television before purchasing, and considering how much rotation and articulation you need to get the best overall TV mount that’s right for you.